This week saw The King’s Singers return to the stunning venue of Snape Maltings Concert Hall as part of Aldeburgh Music’s Snape Proms season.  With this being their last performance in the UK this season, and David’s final UK concert as a King’s Singer, they were honoured to be joined in the audience by former members of the group Al Humes and Bill Ives. With a fitting to tribute to David by Aldeburgh Music’s Chief Executive Roger Wright, it was a memorable evening to round off our 2015/16 UK performances. 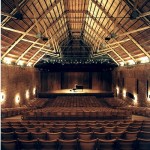